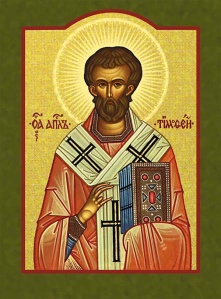 The following sermon was preached by Dr John Stephenson in the seminary’s Martin Luther Chapel for the divine service in commemoration of St Timothy, Pastor and Confessor, 24 January 2020. The text is Mt. 24:42-47.

“Cultivate alertness, therefore, since you don’t know at what hour your Lord is coming.” … You don’t need to be the sharpest knife in the drawer to work out why a seminary would observe the cluster of commemorations that run from the 24th through the 26th of this month, with the Conversion of St Paul sandwiched between Timothy and Titus. After all, pastors in our time are plying the same trade that Paul and his chief assistants practised in theirs. So today the Church holds Timothy before our eyes as one of the trustworthy “slaves” our Lord is talking about in the Gospel reading: claiming not an ounce or an inch of autonomy for himself, he duly fed the flock in the spiritual households over which the Lord set him not only in Ephesus but also in other places around the Mediterranean.

Alas, there’s a sad, sobering, and shocking difference between Timothy in the first century and his ministerial successors and colleagues of today inasmuch as he served during an epoch of boom while we are struggling through a time of ecclesial bust. Timothy witnessed a stunning spiritual springtime with conversions galore and lots of men serving under him as bishops, presbyters, and deacons. Recall how his colleague Titus took the whole island of Crete for his parish, going around freshly planted churches to supply them with shepherds. As their counterparts today, we wring their hands as churches shrink and congregations go belly up. Few and far between are such examples of vibrant spiritual life as Poya’s home church in Berlin, where baptisms outnumber funerals by 100 to one and you have to arrive early for service in order to secure a pew.

But rather than saying, “Okay folks, just sink ever deeper into apathy as the lights go out,” Jesus our Lord speaks to us in the present tense right now, “Cultivate alertness, therefore, since you don’t know at what hour your Lord is coming.” Instead of letting the spiritual indicators of our time plunge you into despair, listen with humility and with hope to Jesus’ promise that where two or three are gathered together in His name, there is He in the midst of them. Take these words literally, bet your bottom dollar on them, in all godly seriousness hold our Lord to them, find therein your escape hatch from darkest gloom.

And yet the three figures from our cluster of commemorations seem forbiddingly far from us in space and time; and if they seem remote, what about the Parousia, Jesus’ glorious reappearance on the last day which is the overall context of the verses that feature in today’s Gospel? Way back then, on one hand, and the unimaginably remote future, on the other, neither of them offers us much solace in the here and now. But because He reigns now at the Father’s right hand, Jesus speaks not only from the distant past or from the far-flung future, but also in this place and at this time. Moreover, His presence now is quite of a piece with His presence in times past and His future presence on His reappearance in majesty. Christ is present wherever there are members of His mystical body, He is present wherever His word is read, pondered, and proclaimed, and most wondrously of all He is present wherever and whenever we heed His command, “This do.” Marana tha, “Come Lord Jesus,” this apostolic prayer is the Church’s appeal to the One who came at Bethlehem to come to us here and now, and when Christ comes at the end of days, He won’t zoom in from distant galaxies, no the selfsame presence hidden in the sacrament of the altar will burst forth into public view and rearrange the universe accordingly.

So as we start another semester; as we keep on preparing what is at this time but a tiny trickle of future ordained servants; as we keep the doors open relying on divine assistance and hoping for a stream of men and women to join our learning and worshipping community; as you continue your studies and anticipate somehow becoming a latter day colleague of Paul, Timothy, and Titus, take not just as a warning but as a sturdy promise and an indication of surprises in store Jesus’ words, “Cultivate alertness, therefore, since you do not know at what hour your Lord is coming.” For the Jesus who will come to judge the living and the dead, the Jesus who will shortly be fully present in host and chalice, this Jesus will come to you in situations and at times you do not expect, whether in His word, in His sacraments, or in His people in ways that cause the penny to drop, the ice to break, and the lights to go on, in ways that leave you in no doubt over His once-for-all victory over the evil one. For as we gather in chapel and in class in numbers that sometimes add up to only two or three, One is with us who is greater than the whole world and more than a match for all the hosts of hell. Your Lord is coming, He is on the move, not only on clouds of future glory, but also in the present Shekinah of His spoken and sacramental gospel.