St Michael and All Angels 2013

The following sermon was preached by Dr Thomas Winger in the seminary’s Martin Luther Chapel on Monday, 30 September 2013, for the Feast of St Michael and All Angels (transferred).

When I think of St Michael, the first thing that springs to mind is downtown Coventry, the city where I was born. Now, for those of you who know nothing about Coventry other than Lady Godiva, I should probably set the stage a bit. Some 1000 years ago, next door to the ‘convent’ from which the city may have derived its name, there came into existence a parish church dedicated to St Michael. In the late 14th-century the city became rich enough to tear down the original Norman building and erect a magnificent Gothic edifice, eventually to be capped with the third tallest spire in England. For five and a half centuries the parish church of St Michael towered among the many spires of Coventry, eventually to be elevated to cathedral  status in 1918.

And then came that horrible night in November 1940. In eleven continuous hours of bombing the Luftwaffe flattened central Coventry to an extent never before seen in warfare. Coventry Cathedral itself fell victim, the only cathedral in Britain to be destroyed in war. Today you can still visit the ruins, the bare walls now empty of glass and the elegant spire still standing guard, the ruins left standing as a memorial to the war, with the starkly modern new cathedral erected next to it. But there’s more to it all than just the remembrance of war and peace.

When the architect Sir Basil Spence first stepped into the ruins, he was immediately struck by the symbolism of it all. The church, the Body of Christ, torn to pieces by mankind’s sinful violence. It was then that he envisioned his new cathedral arising next to the old, death accompanied by resurrection. As one walks today from the old into the new, one passes under the lofty roof of the magnificent porch, as if connecting death to life, and 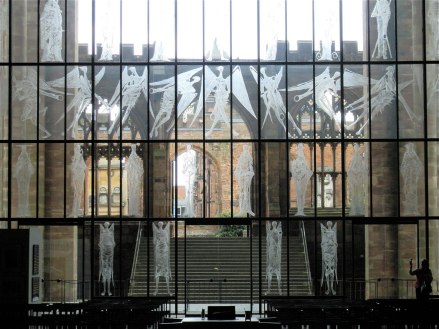 then through the tall clear glass of the west screen into the living house of worship. On that tall glass screen John Hutton etched dozens of dancing angels, surrounding the figures of myriad saints who’ve passed the same journey from death into eternal life. These are the angels who, according to our Lord’s parable, carry the souls of the departed to Abraham’s bosom. And as if to reinforce the image, round cherubic faces are carved into the bronze handles of the doors through which one passes.

Lord, let at last Thine angels come, To Abram’s bosom bear me home,
That I may die unfearing;
And in its narrow chamber keep My body safe in peaceful sleep
Until Thy reappearing. … (Martin Schalling; TLH 429:3)

One of my favourite hymns.

Today on cathedral tours no one says much about death, resurrection, and eternal life. We’re told far more about peace and reconciliation—very important lessons of war, of course. To me it’s still war itself that those two buildings forever picture—yet not so much that great World War, but a more primordial battle, symbolised by Jacob Epstein’s colossal bronze sculpture, St Michael and the Devil, that first greets every visitor. The monumental figure of Michael towers over 6 metres tall. He wears no armour, for his power is other-worldly. Nor does he wear the flowing robes of Renaissance art. Rather, wearing only the sparest clothing of a fleet-footed, agile warrior, his lean athletic figure is put on display. It bristles with muscles, his abdomen is tight, his chest bulges, his hair is crew cut. The tendons in his forearms are taut and protruding as he holds his enormous spear and makes two fists, with his arms extended in a gesture of triumph. There’s no cherubic face, no cuteness or tenderness. This is a soldier who’s done his job, and stands proudly over his defeated and chained foe. But take a look, too, at the old evil foe. He’s no cute caricature either. Horns protrude from a bald head, his face made wicked by exaggeratedly arched eyebrows. If anything, the devil looks more muscular even than Michael. His chest is bulky. His thigh muscles stand out in bold relief. He is the Strong Man of Jesus’ brief parable. The impression given is that the binding of this Strong Man was no easy matter, but a hard-fought, epic battle. Yet there he lies, vulnerable and helpless on his back, his arms held behind as if in a wrestler’s strong hold, his legs bound by heavy chains.

When I look upon that great sculpture, with the ruins of the old cathedral standing in the background, it reminds me of the fundamental character of the church’s existence in this world as we await the second coming of our Captain, Jesus Christ. We are at war! So it is in these end times. Everything in the church year up to this point has been about the past. But when Michaelmas passes, we’re launched into the present end times. St Michael leads the church in this battle, advancing from the D-Day of Christ’s resurrection to the VE Day of His return. He leads us into the great tribulation of the final years, a final battle which is so fearsome, as Christ warns in the Gospels with perhaps a touch of exaggeration, that even the elect may fall away!

But the fight is nothing new. Since the fall into sin the world has forever been divided between the forces of God and the evil satanic hordes. In fact, the epistle reading’s story of Michael and his army of good angels doing battle with the old dragon Satan and his hordes of evil angels, sounds remarkably like an old Jewish story of what happened when Satan first rebelled against God. It may very well be true that when Satan first lusted after the throne of God for himself, it was St Michael as the captain of God’s army who crushed his rebellion, defeated his demonic train, and threw them down into the hellish place God prepared for them. The battle began. God wouldn’t stand idly by and let His good creation fall completely victim to this rebellious Lucifer.

Yet from the day that Satan first coaxed a human victim into his lair, tempting Eve and through her Adam, God promised that another and greater Champion would march forth from the halls of heaven to wage war with Satan. This Captain to come would not just throw Satan out, but would crush his head. In fact, it takes very little imagination to shift the image of Michael standing over the Dragon with his arms extended, to Christ Himself crushing the head of the Serpent with the cross of Calvary. The battle of Revelation 12 is a battle which plays out over and over again through history. But the decisive battle, the D-Day victory, is the one that Christ Himself fought, in which He triumphed by His cross. The Dragon of Revelation, that waited so anxiously for the woman to give birth, so that he might devour the baby before it could grow up into a dragon-slayer, was tragically outmatched. The Lord God Himself was with this Child. The child grew up to be a champion like Michael, but greater. The name ‘Michael’ asks a question in Hebrew, ‘Who is like God?’ In Christ this question received a definitive answer. This child is the very image of God. Like Father, like Son. He’s a champion who can crush the Dragon. When Christ went up to Jerusalem to die, He went knowingly into this battle. ‘Now is the judgement upon this world’, He proclaimed; ‘now the ruler of this world shall be cast out’ (Jn 12:31). On Good Friday and Easter Sunday the battle was played out. Christ Himself was our St Michael, battling against Satan once more, casting Him down, defeating the enemies of God.

Yet among us the fight goes on. Like Hitler’s forces in 1945, Satan is defeated but he won’t give up. Satan and his forces stand before us firing volley after endless volley of godless poison, anxious to repeat his shallow victory over Adam and Eve by capturing their children. So thank God that we’re not only in the midst of war, but also in the midst of an army. St Michael and all his angels fight still on our behalf. But just as Christ’s cross was a far greater victory than that primordial casting down of the evil angels, so also in this churchly fight we find that our Captain is not just a created angel, but the uncreated God-man Himself, Jesus Christ. In this battle, Christ the greater St Michael leads not only an angelic army, but also the saints and martyrs, apostles and preachers of the Gospel down through the ages, through whom He continues to defeat Satan for our sake. When Christ sent out the 72 pastors to preach the Gospel of His kingdom, they returned with joy saying: ‘“Lord, even the demons are subject to us in Your name!” And He said to them, “I saw Satan fall like lightning from heaven. Behold, I have given you authority to tread on serpents and scorpions, and over all the power of the enemy, and nothing shall hurt you” ’ (Lk. 10:17b-19). When they preached the Gospel Satan fell again. And again he falls at this very moment as the proclamation of the Gospel goes on in this house. The church is the battlefield where Satan fell when the waters of Holy Baptism snatched each one of us from his grasp and marked us out for Christ’s possession. ‘All new-born soldiers of the crucified Bear on their brow the seal of Him who died’ (LSB 837:3). And his attacks are thwarted again and again as these new-born soldiers are nourished for the battle by the very Body and Blood of the victorious Captain at this altar. And Satan stumbles and falls. For ‘they can harm us none; the victory has been won’. Amen