Sermon: The Commemoration of Martin Luther 2015 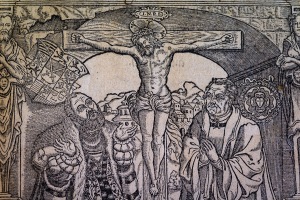 The following sermon was preached by Rev. Dr John Stephenson in the seminary’s Martin Luther Chapel for a divine service on the occasion of Martin Luther’s birthday.

Words are decidedly dangerous things, which is why policemen warn those they arrest that, “Anything you say may be taken down and used in evidence against you.” It’s bad enough when foolish or unguarded words get you in trouble with earthly authorities, but all of us have a courtroom appointment looming ahead, although we are uncertain about the date: “After death comes judgement” (Heb 9:27b) and “We must all appear before the judgement seat of Christ” (2 Cor 5:10). Clever and unscrupulous people can to some extent pull the wool over the eyes of earthly authorities, but there will be no escape when Jesus’ gaze meets yours, there will be no sassy comeback to the judgement of the One to whom all hearts are open and from whom no secrets are hid. As if to underline the danger that faces us and all the living and the dead, our Lord expressly says, “I tell you, on the day of judgement men will render account for every careless word they utter; for by your words you will be justified, and by your words you will be condemned” (Mt 12:36).

One of the deeply unsettling things about Jesus of Nazareth is the way He uses His human lips and tongue and voice. Unlike other public figures, He doesn’t need a script or a teleprompter. As a man He speaks straight from the heart and yet in such a way that He is on the same level as God. This means that all the more than remarkable things that our Creeds and Confessions say about Christ weren’t invented decades or even centuries after Jesus walked on earth, no, the substance of these more than startling statements is found in all four Gospels already; indeed, He was speaking this way as a twelve year-old boy already. Once you grasp this point you may be amazed, even alarmed by a sentence from this morning’s Gospel, but it won’t surprise you when you hear our Lord say, “The words that I have spoken to you are spirit and life” (Jn 6:63b). Jesus pushes this claim all the way to the end of time and space: “Heaven and earth will pass away, but My words will not pass away” (Mt 24:35).

Not only are they dangerous, but words are also absolutely indispensable for human life both here and hereafter, and this is true with respect to both the spoken and the written word. Just think of the handicaps suffered by those with impaired hearing or voice or sight. Even though various strategies exist for minimising these handicaps, the deaf and the dumb and the blind tragically miss out on a lot.

When incarnate God speaks, which He does in Jesus, the broken world is repaired and the world to come somehow breaks into time and space. I pick up from the exegetes that we need to use a capital S and a capital L to get what Jesus means by, “The words that I have spoken to you are Spirit and Life”; His words are God-filled, God-imparting words, words that don’t just give you a momentary lift, but words that transmit the life He has eternally enjoyed with the Father. Remember that Jesus’ words are Spirit and Life when He speaks them through Dr Winger’s vocal chords at the climax of this morning’s service.

What have these reflections on a single verse from St John got to do with today’s commemoration of the birth of Dr Martin Luther some 532 years ago today, you might ask? Well, we might begin by observing that a servant is not above his master, indeed, does not even come close to the level of his master. In the Resurrection our Lord received justification for other people, not for Himself; He doesn’t need to retract any word that He spoke from infancy onwards. Obviously, things were very different for Father Martin, who sailed perilously close to the wind at times. Along with Origen, Augustine, Thomas Aquinas, Philipp Jakob Spener, and Karl Barth, Luther wrote so many words that libraries can barely hold them. And, yes, we need to sieve Luther’s words, some of which should never have been written.

And yet, to quote a great Methodist scholar, it is also the case that some of Luther’s words are among the most beautiful expressions of the holy Gospel ever crafted, and they will build up the Church both within and outside the boundaries of Lutheran Christendom till the Last Day.

Since at least the time of the Zwickau Prophets, lots of well-meaning people have derided book-learning and the whole enterprise of the academic study of theology. A whole modern church body was founded on the slogan “Deeds not creeds.” And a certain prominent clergyman can always count on a round of cheap applause when he says that bishops should be men of action, not men of learning, that shepherds should simply acquire the smell of the sheep and not concern themselves unduly whether they feed them bread or stones. But unless you pay attention to the most minute detail of words, you might very well get Reverend before your name and a stole around your neck and go forth to gain great popularity in the world, all the world filling people’s bellies with stones that will weigh them down to Hell and not in any way build them up for eternal life.

Today’s commemoration means at the very least that we don’t need to make any apologies for focusing on words, including foreign words, on the grammatical form of words and on the syntactical arrangement of words. If you don’t have a grasp of words, you can’t preach, you can’t teach, you can’t communicate one ounce of the superabundant reality of Christ Jesus apart from which no one will ever enter the kingdom of God. Is there more to the Church than the whole office of the Word in its widest sense? Yes, obviously there is, there’s what Luther calls the whole order of Christian love. One member of the laity is helping another through a rough patch right now, and as someone is performing a menial task for one of the least of these Christ’s brethren he or she is doing it for Christ Himself. But all of this Christian love wouldn’t get to the starter’s gate apart from the Gospel that is the power of God unto salvation to the one who believes. And for this Gospel to resound through the world, for Jesus’ Spirit- and Life-filled words to bear their fruit, some men must go to the limits of mental endurance in the study of words that will make a difference in time and eternity. Those Zwickau Prophets were a flash in the pan, even though many have followed in their steps, but the core of Dr Luther’s work has endured, and some of his many words will shine through eternity. Thank God, then, for his birth so long ago, and gird up your loins and roll up your sleeves to ply his trade in your own time.

One thought on “Sermon: The Commemoration of Martin Luther 2015”