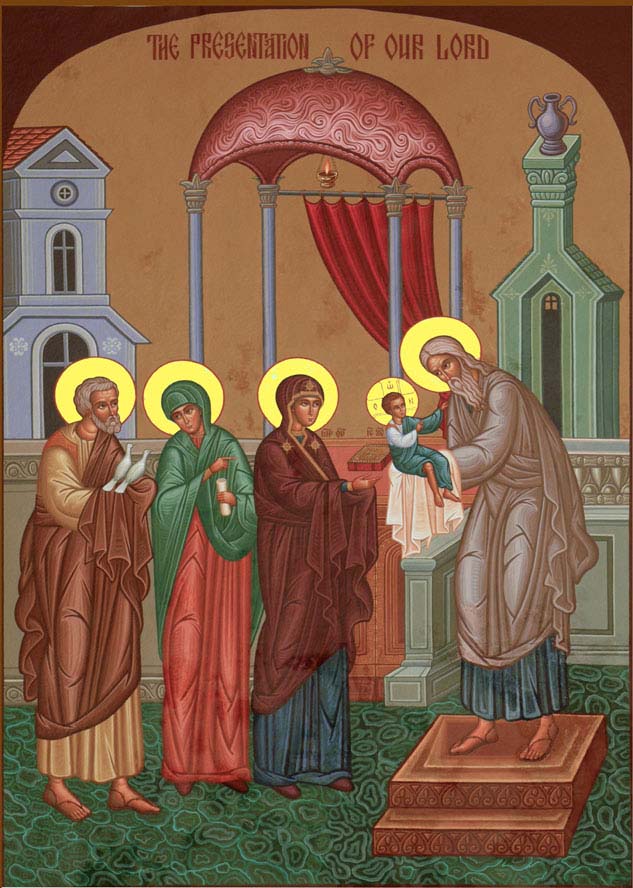 Sermon: The Presentation of Our Lord 2018

The following sermon was preached by Dr John Stephenson in the seminary’s Martin Luther Chapel for the divine service on the occasion of The Purification of Mary and the Presentation of Our Lord, 2 February 2018.

Delicious irony is going on when Moses tells Mary not to touch anything holy for forty days after giving birth to a man-child and she incurs not a whiff of reproach for doing the very opposite. What else can she do but bathe, diaper, nurse, and most tenderly care for this unique little baby in whom, as Paul says, the whole fullness of Godhead dwells bodily? When the Holy Spirit comes upon a woman and the power of the Most High overshadows her, she doesn’t need the purification prescribed in Leviticus. But this Son born of a woman is also born under the Law; so His mother and foster father meekly make their way to Jerusalem, even though it was the front yard so to say of murderous Herod, and they humbly carry out the rites Moses prescribes.

Of course, you can bet your bottom dollar that Joseph never went up to a priest and pressed five shekels into his hand to buy back Mary’s firstborn Son from the God of Israel; there’s no getting this little boy off the hook, He can only be consecrated to the Lord 100% and 24/7 from the get-go till He draws His last breath. Circumcised in our place, through Mary who hands over a couple of birds to a priest, He starts to offer sacrifice in our stead.

The Law makes no demand that the parents bring a new-born child or a firstborn son to the Temple when his or her mother undergoes ritual purification, but the prophet Malachi had said that “The Lord whom you seek will suddenly appear in His Temple”; so it went without saying that they wouldn’t leave Jesus with a distant cousin of the house of David or, as people would today, with a babysitter. No, Jesus steps through the Temple in Mary’s arms as she goes to give two birds to a priest, and something unique happens, something not prescribed by the Law but prompted by the Holy Spirit: Mary and Joseph “presented” the holy Child to the Lord in a wordless, physical gesture.

Even though each of us is a unique composition of physical body and spiritual soul, we need to be careful not to relegate religion to the realm of the inward, the mental, and the unseen. After all, the only other time the New Testament uses the sacrificial verb “present” is when Paul, writing to people engaged in eucharistic celebrations at Rome, commands Christians to “present their/our bodies as a living sacrifice”. Baptism happens to bodies, and mouths receive Holy Communion, with the result that the body and its gestures are most intimately involved in prayer. Luke tells us that Jesus and Paul knelt to pray, setting able-bodied Christians an example for emulation. I once communed a pitifully weak, dying old man whom his relatives had dressed for his last reception of the Blessed Sacrament. Even though I gently told him it was okay to remain seated for the brief service, he preached to me by standing at the dialogue and remaining standing through the distribution, whereupon he flopped back into his armchair, from which he was carried back to bed, never to stand again. Taking his place in the person of the Son, where all good things were given him, he piously “presented” his worn-out, stricken body ere it be laid in the grave to await the resurrection of the dead.

Few members of the clergy have been as verbally productive as Martin Luther, from whose lips and pen more words flowed forth than a thousand scholars could digest in a lifetime. But in 1525, when the Reformer explained to a diplomat from the city of Strasbourg why he wasn’t budging from professing the real presence, Luther made the astonishing remark that, when he elevated the Sacrament at the Consecration, he was “preaching the Gospel to the whole world.” The body language and the gestures of the man at the altar and the folk in the pew tell other people whether or not they truly believe in the almighty words spoken across space and time, “This is My body; this is My blood.” Body language ranks up there with what we communicate by words.

Even though no one could have picked out Mary and Joseph from their brothers and sisters in Israel, the Holy Spirit who had come upon Mary prompted Simeon and Anna to be in the right place at the right time, and He did for them what the star did for the Magi and the angel for the shepherds, opening their eyes to the fact that the whole fullness of God dwelt in the baby held in Mary’s embrace. Simeon, who struggled with sin like the rest of us, certainly got to touch and hold the Most Holy Thing of all, the Enfleshment of God, and he and Anna were bathed from head to toe and in the innermost recesses of their souls with the holiness apart from which no one will see God.

It’s most fitting that in our little corner of Christendom we move from the reception of Holy Communion to being sent out with God’s blessing by singing the song of Simeon, which in terms of content belongs in the Holy Eucharist as much as it does in the office of Compline. There’s something supremely calming about the Nunc Dimittis, about the peace bestowed in the body given and the blood shed, about the presence of the Godman which you take with you out of the chapel and into the world. The mind and the soul should certainly marvel over the little baby who consummates and supersedes all sacrifice, and the body should certainly sit up, kneel in awe, stand to attention, and display unbounded reverence before God Incarnate who, already forty days after His birth, was firmly on His way to accomplishing the unique task for which He came into the world.