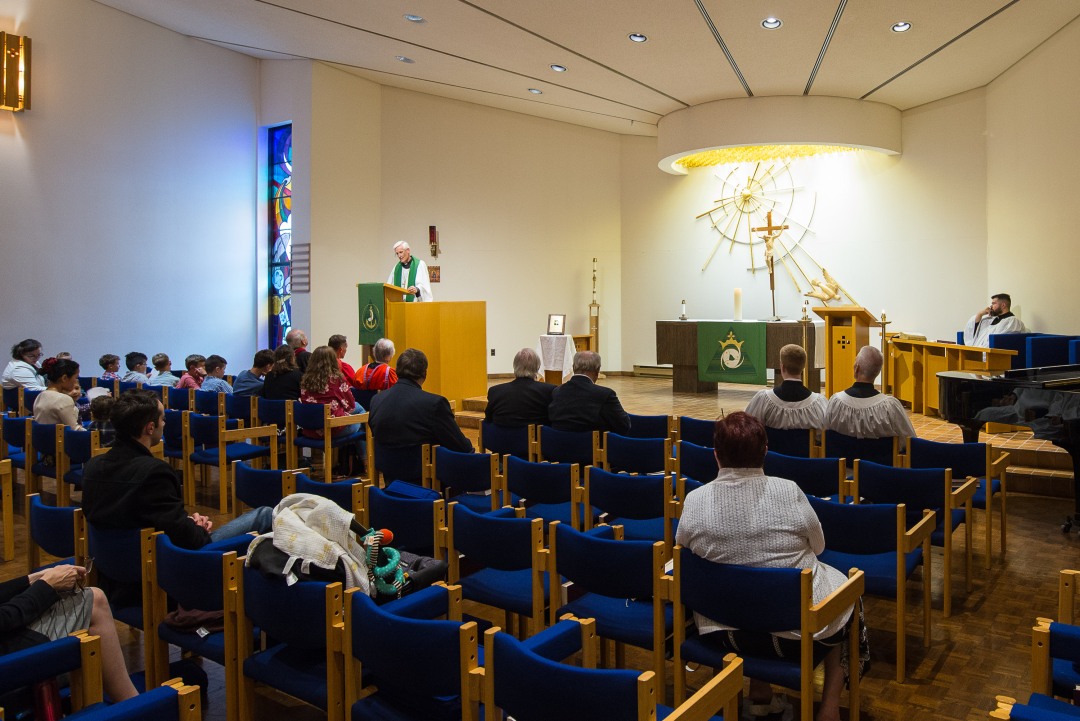 Sermon: “Peace be to you”

The following sermon was preached by President Thomas Winger for the opening service of the 44th academic year at CLTS. The text was the theme verse shared between LCC’s two seminaries for 2019-20:

Dear brothers and sisters of our Lord Jesus Christ: “Peace be to you!” isn’t a tame greeting. So many greetings we carelessly utter have been emptied of their deep meaning. Have you noticed that those who greet passers-by with a quick “how are you?” are surprised if you stop to give them an answer? They don’t really want to know. How many of us in uttering our “goodbyes” mean from the heart to pray, “May God be with ye”? So also when our Lord Jesus appears to the ten disciples on that first Easter Eve, it’s tempting to think little of His greeting that’s only two short words in Greek or Hebrew, εἰρήνη ὑμῖν, “peace be to you!” But to pass over those words as if they were a casual exchange between friends is gravely to underestimate the situation. Dead men don’t just appear behind locked doors and say, “Hello”!

Jesus speaks the powerful words, “Peace be to you”, into a room filled with fear. He anticipates and cuts through the fear that His appearance surely caused. This was no longer just the Teacher from Nazareth. If the two angels at the tomb gleamed with such brilliance that the women fell frightened to the ground, how much more terrifying would be the appearance of “The Living One” (Lk. 24:5), the One who in His resurrected life was unrecognisable to Mary until He spoke her name (Jn 20:16), the One who was thought to be a ghost by His closest disciples ’til He ate fish from their hands (Lk. 24:43)? That was the Jesus who revealed Himself in the room where they thought they were safe, and to their astonished and terrified hearts spoke the calming words, “Peace be to you.”

It’s hard for us to imagine the terror His appearance would have provoked. It’s the reason why heavenly visitors in the Scriptures tend to veil themselves in the form of an ordinary man. The angel of the Lord who came to encourage Gideon to rise up against Baal worship first sat in the shadow of a terebinth tree, speaking calmly the comforting message that God was with Israel. Only when that angel send fire from his staff to consume Gideon’s offering, did Gideon realise in mortal fear who he was dealing with, crying out, “Alas, O Lord God! For now I have seen the angel of the Lord face to face” (Jdg. 6:22). He knew the fatal consequences of gazing on the glory of heaven with sinful human eyes. But God turned aside His fear, saying to him, “Peace be to you. Do not fear; you shall not die” (Jdg. 6:23). And comforted by that promise, “Gideon built an altar there to the Lord and called it, The Lord Is Peace [‎שָׁלוֹם shalom]” (Jdg. 6:24). The Lord is the peace that overcomes death, the peace that protects us even from His own consuming glory. In His resurrection, that’s the glory Jesus brought behind those closed doors, and from that glory Jesus protected His disciples with the promise of His peace.

But though His sudden mysterious appearance may have intensified their fear, they were already “sore afraid”. They were locked behind closed doors for fear of the Jews, the authorities who’d got their Master crucified, who would short weeks after Pentecost stone Stephen and scatter the church, send Saul to arrest and kill Jesus’ followers. And though such a fear for their lives was natural, they may have feared more deeply for their souls. After all, Peter had denied His Lord three times. All but John and the women fled to save their skin. And now perhaps they pondered Jesus’ own warning, “Do not fear those who kill the body but cannot kill the soul; rather fear Him who can destroy both soul and body in hell” (Mt. 10:28). We may not know the fear of looking on an angel or a resurrected Jesus, but we know and understand those fears. Fears founded on our weakness and failures; fears for the future and for ourselves. At this time of year, I’m conscious of our students’ worries. Have you chosen the right path? Will God see you through to the end? Do you have the time, the money, the brains, the heart, the faith, the nobility of soul to serve in a holy office? Are you worthy? It’s a fear shared by the laity of our churches who see the pews emptying and buildings being sold. It’s the worry of pastors who don’t know how long they’ll have a pulpit or flock. It’s the anxiety of churchmen who’ve weathered so many storms but now wonder whether our synod can survive the unrelenting blows of scandal and distrust and apathy. It’s the “fear of the Gentiles” that makes us wonder how much more hostile our already secular society may become. In the face of such fears our Lord says, “Peace be to you.”

Then Jesus does something quite remarkable. But it’s not what we might expect. Once upon a time, when the King of Syria was angry with Elisha for helping Israel’s king to defy him, he sent at night an army with horses and chariots to surround the town where Elisha was staying. Come morning Elisha’s servant was terrified by the sight—the world was arrayed against the solitary man of God and his helper. What could they do in the face of such hostility? But Elisha said,

16 “Do not be afraid, for those who are with us are more than those who are with them.”  17 Then Elisha prayed and said, “O Lord, please open his eyes that he may see.” So the Lord opened the eyes of the young man, and he saw, and behold, the mountain was full of horses and chariots of fire all around Elisha. (II Kgs 5:16-17)

This, too, is true for us. We’re surrounded by a host of angels, any one of whom is sufficient to protect us from the world. And yet, Jesus doesn’t do what Elisha did. He points to no armies with chariots of fire, but simply shows the disciples His hands and His side.

From the wounded hands of Jesus comes our peace. Now, this is not the kind of peace that we’re used to. Not from armies who protect us or diplomats who stave off war, but our peace comes from the flesh that died and rose again. Earlier in John, Jesus had said to the disciples, “Peace I leave with you; My peace I give to you; not as the world gives do I give to you. Let not your hearts be troubled, neither let them be afraid” (Jn 14:27). Like Elisha with his servant, Jesus was teaching them a new way of seeing. His peace would be of an entirely different nature than they were used to. At our seminary retreat last week, I explored with the students the uniquely Hebrew concept of peace conveyed by that familiar word שָׁלוֹם. Whereas our idea of peace is negative—absence of war, cessation of fighting—the Hebrew idea is positive. Peace is healing, the restoration of wholeness, putting broken pieces back together. When my wife and I were in Israel some years ago, the tour guide pointed to a sign on a shop as the bus passed by which read, “שָׁלוֹם shalom pizza”. No, it wasn’t holy dough or special sauce but simply a “whole pizza” rather than pizza sold by the slice. This trivial example illustrates to some degree why Jesus’ greeting could comfort their hearts. Their lives had been fragmented. They’d been torn from their families by Jesus’ call; perhaps even their families were divided in their opinion of Him, father against son and mother against daughter. Their world was turned upside down by His message and now shaken to the core by His death. They were cut off from their culture and religion, Israelites who were no longer Jews. They couldn’t go back to where they once were. Our lives, too, are broken. Our families, our marriages, our friendships, split down the middle by sin and shaken up by faith in Jesus. And, you know, I think this is also the disease of our times. We’re a people broken by the belief that you can devote your life to satisfying physical needs without caring for the soul. Our society thinks the two have nothing to do with each other—just think of the strange notion that one’s gender can be different than one’s sex, a breaking apart of body and mind, as if they have no effect on each other.

To this brokenness Jesus bring healing peace through His wounded hands and side, through His crucified and resurrected flesh. Paul said it this way:

14 For He Himself is our peace, who has made both one,
and has destroyed the dividing wall of partition, the hostility, in His flesh,
15 … that in Him He might create the two into one new man, making peace,
16 and might reconcile both in one body to God through the cross …. (Eph. 2:14-16)

Jesus can point to His hands and side and declare “Peace be to you” because “He Himself is our peace”. His body is where we’re made whole again, reconciled with one another and rejoined to God our Father. In the Old Testament, the “peace offering” was the sacrifice of an animal that a person could bring to give thanks for the deliverance God had accomplished in his life. The peace offering could only happen after the burnt offering, after God had atoned for His people’s sins. On the basis of the atonement, God could both deliver them and rebuild their lives. And so the sacrifice of peace that followed was an act of thanksgiving and praise to God for that redemption. It concluded with a festive meal, taking the meat of the sacrifice and eating it in the presence of God to celebrate the reconciliation, to rejoice in the company of God from whom they were no longer estranged, to experience if only for day the bright banquet of eternity towards which they were heading.

On Easter Eve, Jesus declared that He was that peace offering. The wounds showed that He’d been sacrificed, the atonement had been made; and that the pierced flesh was closed and no longer bleeding showed that what had been broken was now whole, what was put to death was raised to life. In the midst of their fears He points them to that flesh and invites them to rejoice in it, to offer up the sacrifice of thanksgiving, to take up the cup of salvation and call on the name of the Lord (Ps. 16). He still comes to us and shows us those wounds. The pastor He sends speak peace to you and holds up the meat of the sacrificial meal, the life-giving, peace-making, whole-creating flesh of Jesus. In His wounded and living flesh we still find our peace. Every time you eat His body you are made whole. And so those He sends are able to repeat until He comes again the words of His apostle Paul: “The peace of God which surpasses all understanding will keep your hearts and minds in Christ Jesus” (Phil. 4:7). Amen