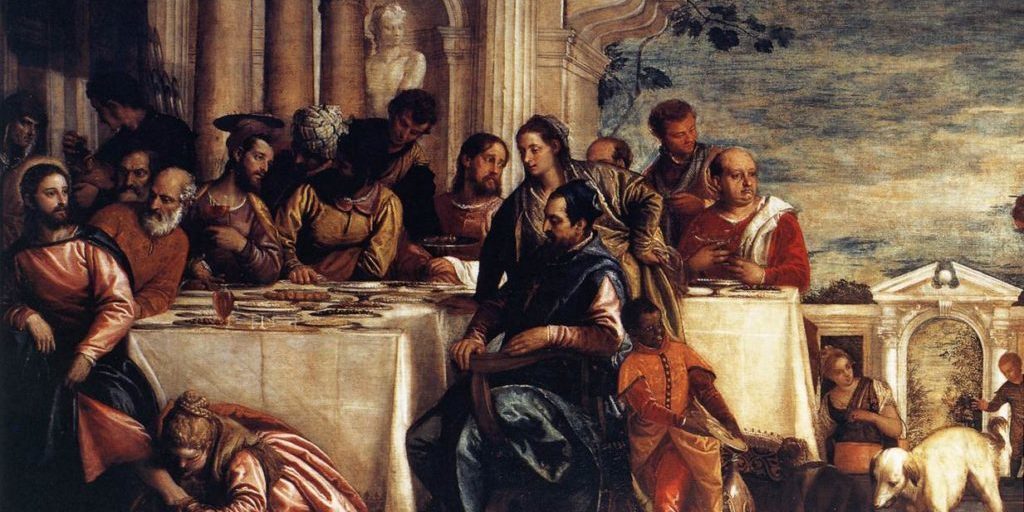 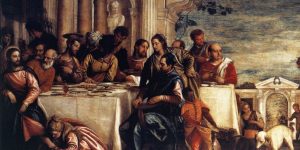 The following sermon was preached by Dr Thomas Winger in the seminary’s Martin Luther Chapel for the weekly divine service on Thursday, 30 January 2020.

27 After this he went out and saw a tax collector named Levi, sitting at the tax booth. And he said to him, “Follow me.” 28 And leaving everything, he rose and followed him. 29 And Levi made him a great feast in his house, and there was a large company of tax collectors and others reclining at table with them. 30 And the Pharisees and their scribes grumbled at his disciples, saying, “Why do you eat and drink with tax collectors and sinners?” 31 And Jesus answered them, “Those who are well have no need of a physician, but those who are sick. 32 I have not come to call the righteous but sinners to repentance.” 33 And they said to him, “The disciples of John fast often and offer prayers, and so do the disciples of the Pharisees, but yours eat and drink.” 34 And Jesus said to them, “Can you make wedding guests fast while the bridegroom is with them? 35 The days will come when the bridegroom is taken away from them, and then they will fast in those days.” 36 He also told them a parable: “No one tears a piece from a new garment and puts it on an old garment. If he does, he will tear the new, and the piece from the new will not match the old. 37 And no one puts new wine into old wineskins. If he does, the new wine will burst the skins and it will be spilled, and the skins will be destroyed. 38 But new wine must be put into fresh wineskins. 39 And no one after drinking old wine desires new, for he says, ‘The old is good.’”

Dear brothers and sisters of our Lord Jesus Christ: The Christmas feast still looms large in our rear-view mirror. And so today’s Gospel story immediately made me think of my family gatherings, which always take place in the week or two after Christmas—and to consider about how they’ve changed over the years. When my brothers and sisters and I were the youngsters, a family get-together was an all-day, active affair. After a big noon-time meal, the adults would play cards or crokinole while the rest of us kicked a football or tobogganed outside. As kids who spent too much time together, we also fought and argued a bit. And when darkness fell we came back inside for a meal of leftovers. It occurred to me this year that two things have fallen away and two things have remained. To my great regret, the playing has mostly disappeared away; to my relief, the fighting and arguing has, too. What remains is a quiet afternoon of talking and eating, a ritual to keep the family bonds alive and strong, to celebrate the gift of Christmas that brings peace among men, with whom (in Christ) God is pleased.

Though such feasts are fading fast in a culture of individualism and family breakdown,  they continue to hold great meaning for us—so much so that many families around us declare Christmas Day to be their “family day” and don’t even bother going to church for the real Feast. But their significance pales in comparison to the meaning of table fellowship in the Ancient Near East. While we might use a common meal to reconcile and heal our families, perhaps to coax a wayward brother into speaking to us again, the Jews saw table fellowship as an intimate affair that could only be enjoyed by those who were already reconciled. To be invited to dine in a Jewish home was to be offered “peace, trust, brother­hood, and forgiveness” (Just, 232), to share in the very life of that family. The idea was anchored not just in Oriental notions of honour and hospitality, but in the God-given terms of the covenant. Faithful adherence to the dietary laws meant that Jews simply couldn’t accept an invitation from a Gentile, at whose table unclean things might be on offer. The Gentile might be unwelcome even at the Jewish table if his hands were unclean from the job he did or his mind and mouth soiled by the worship of false gods. And so Jews kept scrupulous distance from Gentile sinners, and even their fellow Israelites if they were living in open violation of God’s covenantal laws. And boundaries were drawn even starker when it came to the divinely-instituted sacrificial meals at the Temple or the annual Passover feast, to which only circumcised and clean members of God’s covenantal family were welcome.

It was all that that Jesus, in the eyes of the Pharisees, seemed to be violating when He accepted the invitation to dine with Levi, the tax collector, whose hands were soiled by contact with Romans and the devotion of whose heart was apparently divided. The Pharisees looked at it this way: Jesus was clearly a holy man, a teacher of the Law like them. But if He ate with tax collectors and sinners, His holiness would be spoilt and His understanding of the Law would be proved faulty. They wanted Him to be like the priest and the Levite who walked by on the other side of the road rather than defiling themselves by contact with a dying man. But Jesus will have none of it. He completely reverses their logic. “Those who are well have no need of a physician, but those who are sick. I have not come to call the righteous but sinners to repentance” (Lk. 5:31-32). In other words, Jesus goes to the home of the sick because He is the Doctor. He visits the sinful because He’s their spiritual Healer. His holiness isn’t contaminated by their uncleanness, but, being overwhelmingly more powerful, His holiness burns up their sin and cleanses them. He is the Most Holy Thing that makes things holy. The Pharisees don’t understand His actions because they don’t understand who He is. They’re still reading the world through the lens of the old covenant. But something new has come. Switching analogies, He claims that the divine Bridegroom has come. He must feast with them because they’re the guests He’s invited to His joyous celebration. A wedding feast without the Bridegroom would be more like a funeral wake (though Jesus would famously spoil that, too). Everything has changed since Jesus is here. To look at Him through the old covenant is as foolish as putting young wine, still fermenting and bubbling, into crusty old wineskins. They can’t handle it. They burst, and the gift is lost.

Now there is a way in which today’s holy meal is like the fellowship meals, the sacrificial banquets, of the old covenant. This is an intimate moment for God’s people, His family, to share. It’s not open to the world. To be invited to this feast is to be granted God’s peace, trust, brotherhood, and forgiveness. But Jesus’ retort to the Pharisees urges them to consider exactly who it is that needs God’s peace and forgiveness. Jesus isn’t choosing the company of sinners instead of the “holy” Pharisees; rather, He’s calling them to embrace and enter the company of sinners themselves, to recognise their own need for the Physician’s spiritual art. The words of Luther’s catechism likewise invite you not to consider how you might make yourself worthy for this holy meal—though that’s a commendable endeavour—but rather to recognise first your unworthiness. If you don’t believe that you’re part of the company of tax collectors and sinners, then you cannot possibly believe in those divine words “for you”. Repentance isn’t a way to make yourself pure enough to receive these holy gifts, but is rather the way in which they’re received: repentantly. It’s the way of Levi, who responded to Jesus’ call by walking away from his old life and holding a feast so that other tax collectors and sinners might meet Jesus and be changed as he had been changed.

My family wasn’t broken by the inevitable arguments and unkind words that were hurled at each other when tempers frayed and familiarity bred contempt. Rather, it was the very nature of family that it could suffer such things without breaking. The family meal was the place where such things could be healed. So, too, you aren’t called today to this altar because you’re good enough to handle these holy things. You aren’t here because you’ve been able to set aside completely your lust, greed, pride, shame, anger, apathy, resentment, or despair. You’re here because you want to turn away from these things, to unstrap the burden and lay it on Jesus. You come here because you want the holiness of Jesus to consume the blackness of your unholy thoughts and acts and give you a clean conscience. You come to be healed at your family table, to be reconciled with each other, forgiven for how you’ve harmed each other, and to experience again the love of your Father. All that is here for you. But I took the liberty today of extending the appointed Gospel reading to hear the rest of the story. Because, I think, we can’t understand the full joys of Jesus’ fellowship meal with the tax collectors and sinners if we only think of Him as a doctor entering a plague-infested home. No, Jesus says, it’s not just about a medicine to fight a disease, a pill to be popped and that’s that. It’s about new wine to be drunk with the Bridegroom in celebration of His great day. We’ve been dragged in from the streets to feast with Him, startled by the undeserved generosity. And so it’s about Eucharist, looking not with disdain but with thanksgiving and joy upon the inclusion of sinners (like you and me!) in the banquet. So be at peace, be healed, be strengthened; but do it with song, praise, and feasting. For the Bridegroom is coming and fasting is over. Amen