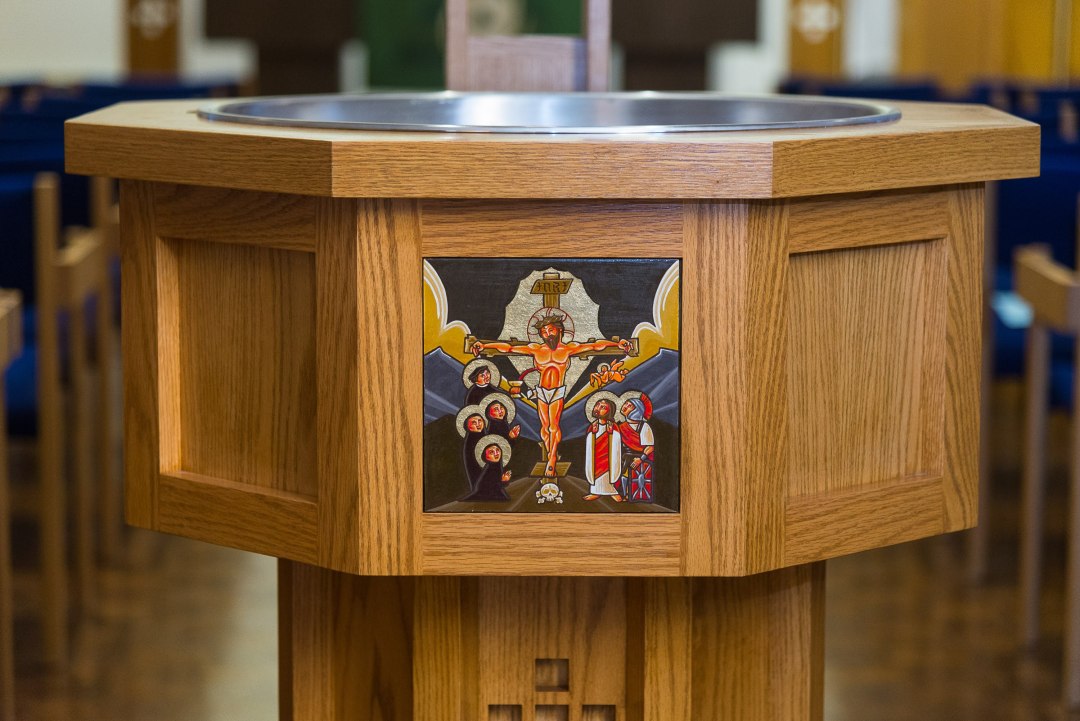 In May we were overjoyed to install and consecrate a new oak baptismal font in the seminary’s Martin Luther Chapel.

At the time we announced that the font’s design included an ongoing project to add small pieces of artwork depicting the Christian Church’s ministry in Word and Sacrament, based on the model of catechetical fonts in mediaeval England.

This month we were pleased to install and bless the first piece of artwork, the central image depicting the crucifixion of Jesus. The icon is the work of Lutheran artist Avery Prozenko (a member of St Andrew’s Lutheran Church, Halifax, now living in Montreal), whose style is a blend of the Coptic and German Lutheran traditions.

The depiction of Jesus is decidedly muscular–He is the Stronger Man who through His death defeats and binds the strong man, Satan (Mt. 12:29). Witnessing His death are John the Evangelist, a Roman soldier, and the three women, as described in the Gospels. Beneath the cross are the bones of Adam, reminding us that by His death Christ (the Second Adam) reversed the curse that brought death into the world (Rom. 5:12-14). (An ancient legend says that the place of crucifixion was actually where Adam’s bones were laid to rest by Melchizedek. This was Golgotha, the Place of the [his!] Skull.)

From Christ’s side flows a river of blood (Jn 19:34), which is caught in the chalice of the Lord’s Supper. The cup is held by Martin Luther as a representative of the pastors who carry forth the divine gifts to God’s people. The crucifixion scene is the first of eight pieces to be placed into the font’s facade; all of God’s gifts flow from His atoning death.

We are thankful to the Seminary Guild whose members have provided gifts to fund this ongoing project.

One thought on “First Artwork Added to Baptismal Font”