The following sermon was preached in the seminary’s Martin Luther Chapel by Pastor Alan Bauch on Wednesday, 8 October 2014. As this is the Gospel text for next Sunday in the three-year series, this may be both devotionally helpful and inspiring for preachers. 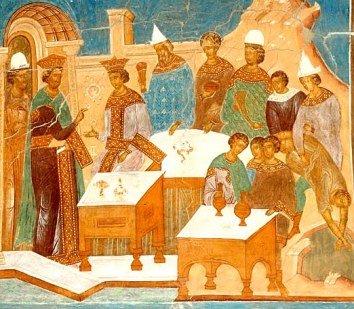 Back in my career in the paper industry a group of us were on a business trip. We had spent a long day working at the paper mill in Luke, MD, a very small town in western Maryland. We were hungry, but it was late, and where were we going to find a restaurant open at eight or nine o’clock in Luke, MD? One of the engineers from the paper mill said, “No problem—I belong to a private club. I’ll take you there and you’ll be able to get something to eat.”

So we cleaned up enough to be presentable and drove across the border to Keyser, WV. We were surprised to find anything at all in this small town, but we followed him to the club and walked in ready to eat. As we came in we were met at the door, where we pointed to our guide. But the doorman who met us had a response we never expected. He said, “You can’t eat here dressed like that. You’ll need jackets to eat here.” Oh, no, we thought. We’ve been told we aren’t classy enough for a hole in the wall club in a non-descript town in West Virginia!

At first we thought we were being told to leave, but then the man continued, “So come with me to select your jackets.” Our host chuckled as we discovered this was a formality we hadn’t expected to encounter. The club attendant then opened a closet that displayed the most hideous collection of clothing you’ve ever seen. Some of us went for the plaids and the stripes, but I chose an olive green special that probably wouldn’t match with anything I’ve ever worn before or since. We got plenty of laughs over dining in this club with an exclusive dress code, but the fact was we were made ready for the supper that was to come.

We were there that night because we had been invited. But our admittance was by reception of a very special gift—the right clothes for the evening.

In Jesus’ parable of the wedding feast—continuing the stories He told after entering the Temple during Holy Week—the message was again clear to those who heard it. The Jews had been invited to God’s heavenly banquet, but had refused to attend. They were busy with what they perceived to be the important things in life. They were no more interested in this Galilean rabbi than my colleagues and I would have been interested in this supper club, if we thought we had other options.

But Jesus warned them that the king was going to host this feast with or without them. If they would not believe in the prophets who invited them to turn to the Lord and repent; if they were going to mistreat and kill the servants who were calling them to eat of it now—then God would send His servants to find new people to take their place, even if these new guests were not from the chosen people of Israel.

The man in the parable who is stunned when the king declares him unworthy of his son’s wedding banquet was right to come there because he was invited. But he didn’t belong there because he had refused to wear the robes he was handed at the door. “Hideous,” he must have thought. “I’d much prefer to wear my own clothes, rather than sit here in these robes that don’t match the wardrobe of my life.”

Fact is, none of the guests had time to bring fine clothes with them. They had been found on the highways. But they fit in well with the king’s crowd when they were covered with the robes that honoured his son.

Of course, Jesus was talking about Himself. This was the Son of the King they were talking to. They had been waiting 2000 years as the chosen people of God, the descendants of Abraham, but they were about to forfeit their invitations because they would not believe.

That’s how faith works. We are all invited. The Word of God calls us to come to the house of God, to be filled with heavenly food, and to rub elbows with the King and His Son. In this feast of faith, God does it all: plans the banquet, makes the preparations, sends the invitations, gathers the guests, even provides the clothes—all we do is come and enjoy the abundance that the king sets before us.

We are called to God’s kingdom because God has invited us through His Word. But we receive the blessings of His rich food and refined wine because God has clothed us in the robe of Christ’s righteousness. And He never fails us. “For as many of you as were baptised into Christ have put on Christ” (Gal. 3:27).

And in His kingdom there is a feast going on that has the taste of Word and Sacrament. In faith we come to God’s Divine Service because we know we’ve been invited to hear, read, mark, learn and inwardly digest our salvation proclaimed. In faith we come because the baptismal water of God’s grace has covered us, so we come in exercise of the daily power of our own baptisms—the new Adam rising each day as the old is left in the font of God’s cleansing.

Lest we ever fear we’ve either forgotten or soiled our wedding clothes, the pastor speaks words of absolution as Jesus breathes forgiveness on us and even those secret sins of our inmost hearts are blown away.

In faith we come to the earthly banquet, where Christ’s own body and blood is served for our forgiveness, life, and salvation. We come in the appropriate dress for the banquet because God provides it, and He invites by grace without any merit or worthiness in us.

And so, together we proclaim our thanksgiving that we—the bad and the good who were gathered on the road—have been clothed in the robes of Christ’s own righteousness, so that we do belong here.

The invitation bearers—those who have known the taste of God’s grace—are out combing the highways, looking to invite the good and the bad, making testimony to the quality of the food and to the hospitality of the host. But not all the invitees are in attendance. Many have found other things to do. “Not interested in Your party,” they say to God. It’s pretty clear that in Jerusalem, days before His crucifixion, many are refusing to come to the banquet in Jesus’ honour. “You don’t impress us as royal,” they replied. But it wasn’t wise for the people of Jesus’ parable to refuse the invitation of the king. The book of Hebrews warns, “It is a dreadful thing to fall into the hands of the living God” (Heb. 10:31). Sadly, many of those invitation-decliners today are people around us whom we love and cherish.

But some will take the invitation and come to eat the finest meal they’ve ever had—maybe even thanking us for finding them on the road. Some will come in, only to withhold their full participation, instead of taking the clothes of celebration, stubbornly protesting with clothes of bitterness or self-trust. Hear the Word of God: we don’t own clothes good enough for this feast. We are called to come and put on the fine garments of grace and salvation—these are robes supplied by God and received in faith.

Be you among the good or the bad along the road, hear that there is a royal feast of everlasting life as Christ and His Church rejoice. The King greatly desires your presence inside. When you get to the door, He will issue you a lovely jacket that says “You belong here!”

Coming to the feast prepared by our Lord makes no sense without wearing the clothes of grace that He provides. Praise and thanksgiving make no sense without the gratitude of receiving God’s grace. Remember the promises God makes to us in our baptism: perpetual cleansing, eternal righteousness, the power of faith to trust in Him, the strength to endure in this life, and the hope of the life to come. Don’t ever take off those robes of Christ’s righteousness. Remind others of the gift they, too, have in the call to the wedding feast of the lamb, whose kingdom has no end. You have been invited by the Word and you have been chosen in faith. Now enjoy the party. Amen.