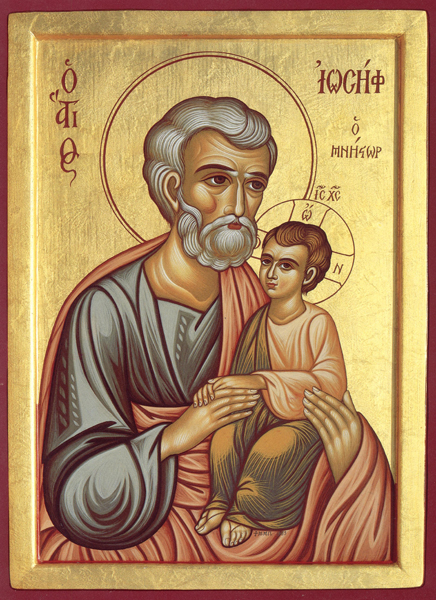 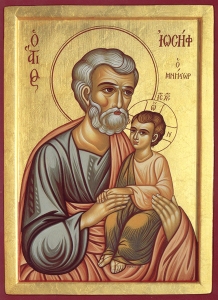 The following sermon was preached by Dr John Stephenson in the seminary’s Martin Luther Chapel for the divine service on the Festival of St Joseph, 19 March 2018.

A body wound needs ointment; a disease of the heart cries out for medicine. Simply by being himself, St Joseph embodies the remedy for one of the greatest ills of our time.

However fallen away they might be, people still associate Christmas with the giving and receiving of gifts. Over in England children sometimes write letters to Santa Claus specifying the presents they’d like to receive on 25 December; I dimly recall hopefully putting such a letter up the chimney of the coal fire on Christmas Eve, confidently expecting a white-bearded old gentleman clad in red to deliver the specified items by the morning.

So a couple of years ago a British newspaper report caught my attention: some teenage boys weren’t asking for smartphones or computer software or items of clothing, but instead were telling pollsters that what they really wanted in that year’s Christmas stocking was a Dad.

There are some, indeed many problems money can’t solve, and swelling cohorts of fatherless young men and boys are one of them. Actually, many girls and young women are sinking under the same tragic burden, and a healthy psyche obviously requires a mother as well as a father. But our seminary exists chiefly to train spiritual fathers for future service in the household of God; moreover, the spotlight of today’s feast falls on Joseph, not Mary; and so today of all days our focus naturally flows to a contemplation of the most blessed father-son relationship in human history.

Among the attributes of God that we know by right reason as well as through revelation is the fact that He needs nothing from the creatures He has made. While true in itself, this statement shouldn’t lead us to picture God as some dispassionate Stoic in the sky, untouched by the bustle and chaos and misery that prevail here below. When the Father’s Son became Mary’s also, He accepted real human limitations and came down to share in human need. Asking for water from the Samaritan woman was mainly but not only a conversation opener. Hence the enfleshed Son needed more from Mary than just a womb to hang out in for nine months; He needed more from Joseph than just bread on the table and a roof over His head.

It will boggle our minds for eternity that the Eternal Word learned human speech and the whole proper use of words from Mary and Joseph, that the Maker of all things allowed Joseph to teach Him to make useful objects out of wood and perhaps other materials also. The highest compliment Jesus paid to Joseph happened simply by being content to follow him in his trade, the carpenter’s son becoming not a garrulous member of the chattering classes, not a businessman in search of quick profit, not even mayor of the town, but a quiet, methodical, reliable carpenter alert to the needs of His neighbours.

There’s a whiff of Tolkien’s Aragorn about St Joseph, this scion of the fallen house of David who was content to live the life of a nobody, this working man who in truth bore the style His Royal Highness before his name, this humble man who was likely a major claimant to the throne of David. While he didn’t brag about his lineage, he didn’t hide it, but made his way to Bethlehem to register in the census of Augustus Caesar. And when the hour came for the God of Israel to send a prince of David’s line to be the definitive heir to the throne, Joseph had the meekness and humility to accept Isaiah’s rebuke to Ahaz in the prophecy that a virgin would conceive and bear a son. The Lord keeps His promise to David, but the sullied house of David would not in this case do its part to transmit human life; Joseph must step back as God gives a completely fresh start to mankind in the fruit of Mary’s womb.

Yet even though he was not permitted to be our Lord’s biological father, Joseph showed himself the best and most committed of all foster fathers and guardians of needy children. This quiet man who speaks not a word to us from the pages of the New Testament bore powerful witness to the Child committed to his care when he took Jesus and Mary by night to safe refuge in Egypt.

Quiet, steady, brave, hardworking Joseph is a wondrous model under God for all men who are charged with any kind of fatherhood. There are Herods out there doing their best to prevent children being born. Protecting little ones from the dangers of the world is harder than ever when you’re up against public education and the perils of cyberspace. And all those who leave this place charged to be spiritual fathers to assemblies of Christians are to look after children of every age and protect them from wolves, and not least from those wolves who camouflage themselves in sheep’s clothing.

And just as Joseph protected the Holy Child from Herod’s murderous troops and from bad men in general, so as we ordained men preside at the altar when Jesus makes bread His body and wine His blood, we have a God-given responsibility to protect the holy things from profanation as much as in us lies. We are to see to it that consecrated bread and wine are received aright and treated with the greatest reverence; we and not the altar guild are primarily responsible for making sure that Jesus’ body and blood are never treated like common bread and wine. We are to show the same zeal for the sacrament of the altar as Joseph did for the tiny Christ Child; after all, the Father in heaven entrusts the same reality to our hands.

From the other side of the altar Joseph joins us at the Preface today; we enjoy fellowship with him, and in the communion of saints he encourages every man in Christendom to exercise the gift and charism of fatherhood in whatever way it pleases God to bestow this responsibility upon us. If the boys I mentioned at the outset didn’t receive Dads in their Christmas stockings a couple of years ago, may it please God to grant them worthy male role models in their lives and above all to bring them under the care of spiritual fathers in the holy Church, that they may bask in the healing glow of relating blessedly to the First Person of the Trinity, who lovingly bids Joseph and all Christian men and women to call Him Our Father.