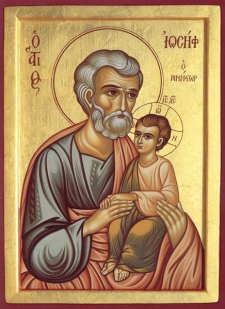 This sermon was preached by Rev. Dr Harold Ristau in the seminary’s Martin Lutheran Chapel for the divine service on the occasion of St Joseph, Guardian of Jesus, 19 March 2019.

It’s bad enough that Lutherans barely talk about the blessed and holy Virgin, Mary, the mother of our Lord and God. But St Joseph is almost entirely forgotten among us. If it weren’t for Christmas, with Joseph depicted as the silent observer beside the manger of the Christ child, we would hardly have a reason to recall that the Son of God, who was conceived by the Holy Ghost and born of a Virgin, had a “foster father” or “step dad” (so to speak) that played a very important role in salvation history: one that reinforces the fact that Jesus was, and is, truly God and truly man—human—as our holy Lord did not deem it beneath Him to be active in a real, historical, earthly family. By virtue of Jesus’ holiness, we call that family the “holy family”. For this reason St. Joseph has a special place in the heart of the Church and our Christian lives. The reason the catholic Church marks saints on the calendar is to make sure that they are never forgotten or their purposes devalued. In some denominations, the theme for any given Sunday is up to the preachers’ personal whims and preferences. But, thanks be to God, that that is not the case for us. The Church not only prevents us from focusing on what we want to hear, but rather directs us to what we need to hear, but it always confesses that the remembrance of the saints is not for their sake, but for ours! For St Joseph, as Jesus’ “earthly” father, provides an example to every Christian: consider the love he showed to his saviour and his devotion toward his safety while they fled from Herod, and missionary zeal for the survival of the Son of God, upon whose life and death, the salvation of the world depended. St. Joseph is rightly then called “The guardian of our Lord”. In fact, in parts of Italy March 19 is connected with Father’s day, as Joseph’s behaviour towards Jesus acts as an example for all fathers, of love, commitment and sacrificial service towards their children.

And so Our Lutheran confessions encourages us to honour the saints by imitating their lives, and to be encouraged by their faith. For them we give God many thanks for the way our faith and Christian lives are strengthened by their examples. As a pastor in Montreal, I used to visit the St Joseph Oratory with my catechism classes as a kind of field trip opportunity to discuss the positives and negatives of Roman Catholic piety. The oratory is a famous pilgrimage site where Christians from all over the world come and pray to St Joseph, asking him to help them in accordance with their various vocations as husband, father, worker, etc. The various altars to St Joseph are intended to encourage Christians by helping remind pilgrims of St Joseph’s virtues and faith. However, I do not recall any of the prayers being addressed to Jesus; which is a key difference in emphasis between Lutherans and Roman Catholics. For praying to the saints can lead us away from praying to Christ; Christ, to whom and through whom all the saints directed their pious prayers and worship—and still do—and each saint would have us do the same. But incidents of misuse of pious activity directed towards the saints by the Roman Catholics shouldn’t lead us Lutheran catholics from tossing the saints aside. The saints in heaven are as much the friends of God than the saints on earth. But we can see … us. What we do not see is them. We have a hard time believing what we cannot see. So here, St Joseph is a great help, for he is an admirable example of faith. For instance, He hears God speak to him directing him to take God’s son out of Egypt and does exactly what He was told, not dismissing it as a product of his imagination, but trusting God’s trustworthy word, and without any hesitation whatsoever. We recall his same faith and love for God when, after he assumed Mary had committed adultery he wanted to let her go with dignity, and not spite; with a heart shaped by love and forgiveness, in spite of the ghastly circumstances. “Fear not to take unto thee Mary thy wife: for that which is conceived in her is of the Holy Ghost.” God’s servant Joseph committed Himself and his fiancée into the hands of his heavenly Father, just as His Son Jesus, would do at Calvary, regarding Himself. Usually we think of a son following the footsteps of his father, but in this case it was the other way around! Now a godless man would not have behaved this way: he would have argued with God, or hesitated to believe the voice of God’s messenger—the angel who was his pastor at that moment—or doubted the divine intent. But Joseph believes, like a child, the words of his heavenly father and obeys!

Not only is Joseph a model for Christians in general and husbands in particular, but also for fathers. Joseph has an undivided commitment to Jesus’ safety. He flees from one land to another, like a refugee, and does all within his ability to keep Christ safe and sound in body, just as the saviour keeps him safe and sound in soul. He is a good picture of the church and even stewardship of God’s gifts. For Jesus did not take second place in his list of priorities. His job, security, career plans and personal goals bowed their knees at the altar of Christ. Church came first! Joseph treasured Jesus above everything else, setting a pattern for us all. For this baby was born to die, not only for Joseph, but for the whole wide world, even for those who so devilishly sought His destruction. The Son of God would be destroyed, sacrificed for the sin of the world, but in his time, after fulfilling the Law for us all. Yet during that mission, the holy blessed family—with Christ at its head, yet also cradled between their arms—were refugees and strangers in their world. After this Son was born, they no longer belonged in the world. As Jesus Himself said, “foxes have holes and birds have their nests, but the Son of Man has no where to lay His head ….” This world was not his home, nor was it theirs, and neither is it ours. For we children of God, abide in this child of God, who take us his servants, his citizens, his sinners, out of this temporal world to our true eternal home and family in heaven. In our baptism, he seals for us our heavenly home, and guards and protects us spiritual refugees until we get there. The door to the heavenly house has been unlocked by Christ’s death, with the passage paved with his innocent and precious Blood, given and shed for your forgiveness (+). For Joseph wasn’t perfect. He lost sight of Jesus at times. He estranged himself from this Son momentarily, until he found Him in the temple. And it is there in the Church, in the presence of Jesus, that we strangers of God have become also become the friends of God; sinners made saints; enemies become true children of heaven, by the blood of this unique Son of God. It is this same Jesus, the Son of God, that Joseph transports in the womb of Mary, the Mother of God, from Nazareth to Bethlehem; and then, shortly after His sacred birth, he carries them both in their flight to Egypt. And then once again, he guards the holy virgin and child, in their return to Nazareth. Joseph is nothing less than a hero, and even, a kind of, well, “saviour”, of the one who is the ultimate hero and saviour of us all. He is a guardian of the guardian.

And so we give thanks for St Joseph, this “Guardian of Jesus” …. Jesus, who is His guardian, and Jesus who is yours. Amen.