The following introduction and homily were delivered by CLTS President Rev. Dr Thomas Winger at the online Call Service Vespers on Friday, 29 May 2020, 7pm, from the Martin Luther Chapel.

The grace of our Lord Jesus Christ and the love of God and the communion of the Holy Spirit be with you all. Amen.

The annual “call service” is the culmination and goal of the seminary’s year. As the name suggests, the focus is on the disclosure of God’s calling to the men who’ve offered themselves for the holy ministry—and preparing them for this vocation is what we’re all about. The announcement of placements tonight will be followed in due course by holy ordination, and installation into their first congregations. And when these things have all been done, we will be confident that God has called them. As a part of this divine act, the call service is a big deal.

But the big deal isn’t just the news of who’s going where, a pastoral candidate and a vicar tonight learning where they will move and serve, congregations finding out who their new shepherds will be. The big deal is that God is at work in the liturgy to speak to us and to bless His servants, and His Church is gathered together to pray for them and give Him thanks for His gifts. The faculty of this seminary wrestled at length with the dilemma of how to do this in the present crisis. And they concluded that it would be best to hold only the simplest of events this evening through this rather impersonal online format, in the hope that we might gather at the opening service in September face to face. Even Paul’s magnificent letter to the Romans was but a prelude to his joining them in the flesh, as he wrote: “I long to see you, that I may impart to you some spiritual gift to strengthen you—that is, that we may be mutually encouraged by each other’s faith, both yours and mine” (Rom. 1:11-12).

So for now we forego the festivities normally associated with this service, including the academic awards given to our students, and those honours we’re pleased to give to God’s servants outside the seminary: the Delta Chi award to Mr Carl Wathke and the Friend of the Seminary award to Mrs Mary Silver. As this year draws to a close we remember also the sorrows it contained, particularly the death in Christ of Mrs Linda Lantz and other close members of our various families, and we rejoice at the birth of children to the Miller and Winterle families. We’re proud that Paulo Winterle has completed the Master of Theological Studies degree, and regret with him that his parents will be unable to come for his graduation at Brock and meet their new grandchild. And we’re thankful to Dr Werner Klän for his expert teaching during his regrettably truncated stay in our community.

Because of the limits on public gatherings in Ontario, our students and their families aren’t able to be present in the chapel with me. They, the faculty, and our Regional Pastor Bublitz are participating in the service by video conference, while the rest of the church is able to watch the live stream. It won’t be perfect. And in order to minimise audio problems, the faculty and students will have to mute their mics until we come to the rites of placement. But I ask them and all of the live stream viewers to participate by following the posted order of service and using Lutheran Service Book. Please sing and pray with us. The service is Vespers, beginning on p. 229 of LSB. 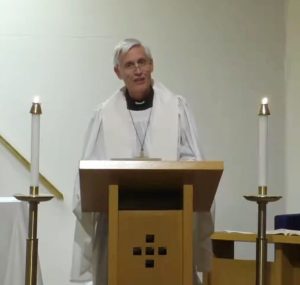 Dear brothers and sisters of our Lord, Jesus Christ: a few encouraging words for you that flow out of these readings. Did I say “encouraging”? It doesn’t sound like it:

“Encourage” means to have “courage in” us; but like the lion of Oz, we seem to be sorely lacking in that quality. It’s as hard to find as yeast in the grocery store.

The whole world seems to be against us, and Jesus says little to contradict that impression. We’ve been unable to gather for worship for months, and so we’re forced to see each other through a glass darkly. Is this persecution? At first it didn’t seem so, as we were asked to do no more or less than any other group. But as the shops begin to open and there’s no sign of worship again being permitted, it does start to look like disdain at least, if not hatred. Courageous Christians in the US have successfully challenged this infringement of their religious rights and I admire them. But at the same time, to call what we’re suffering “persecution” is a slap in the face to our brothers and sisters around the world who know what real persecution means for life and limb.

Nevertheless, the world hates us. They think we’re troublemakers. Whether it’s supposedly spreading disease through our “non-essential” public gatherings and drinking from a common cup, whether it’s our vocal opposition to immoral and unhealthy lifestyles, or our defence of the unborn and elderly against those who would kill them for the sake of convenience, the world hates us. Superficially they hate us because we get in the way of what they want to do. More deeply, I think they hate us because we lead them to reflect on their own actions. We make them feel guilty.

And yet, this isn’t why Jesus says the world hates us. It’s more like xenophobia or anti-Semitism, hatred of immigrants and strangers. They hate us because we don’t belong to the world like them. We don’t join in their ways, worship what they worship, encourage and support them in their godless choices. Jesus says they hate us because He has chosen us, and because they hate Him. They hate us because we belong to someone else who loves us beyond a love they’ve ever experienced. It’s the hatred of Ishmael for Isaac (because he was Abraham’s beloved son), of Esau for Jacob (because he received Isaac’s blessing), of the eleven brothers for Joseph (because Jacob favoured him). It’s the hatred of the world for Jesus, the Beloved Son, which led them to crucify Him.

Like those favoured sons, indeed like Jesus Himself, we’ve been chosen for a special relationship with our heavenly Father, for a higher life that’s ours already and endures beyond this world. So we know that the things of this world are temporary, passing, non-essential, not worth clinging to. Why would we want to be a part of that? We have a possession that surpasses all these things: the love of the Father, the Word and gifts of Christ, the Spirit given as a down payment and the eternal heavenly banquet as the redeemed reward.

If I were to choose a passage to “encourage” you, Vishal and David, this wouldn’t be it; but I would be wrong. This passage seems so negative about your future—going out into a world that hates you. But it’s really quite the opposite. It’s negative for the world that hates Christ, but immensely positive for us who love Him. Christ bids us look at what’s hidden, not what’s obvious. We have been chosen to belong to Him. “I have said all these things to you to keep you from falling away” (Jn 16:1), He says. His powerful Word has taken us out of the world even while we’re still in the middle of it. It’s like being pulled into a lifeboat in the midst of a storm—though we’re still “in” the storm, we’re no longer at its mercy. And, of course, this is the very image of the Church that Jesus instituted when He rescued the disciples on the Sea of Galilee, and which Peter took up to describe the blessings of Baptism in his first epistle, Baptism that now saves us. The storm hates us but it can’t harm us.

That Gospel for us is at the heart of the ministry to which you’re being called. To draw people away from the world with its fading glory towards the life and gifts that last. To show them not hatred but love, the love of a Father for His one-and-only Son into which we’re drawn and immersed by His calling. So be encouraged, and be strong in the Lord’s strength so that you can encourage others with what you’ve first received (II Cor. 1:4). And having that mind in you, which is yours in Christ Jesus (Phil. 2:5), be calm, be comforted, be steadfast, be faithful in the calling Christ has for you.

The peace of God which passes all understanding will keep your hearts and minds in Christ Jesus. Amen.