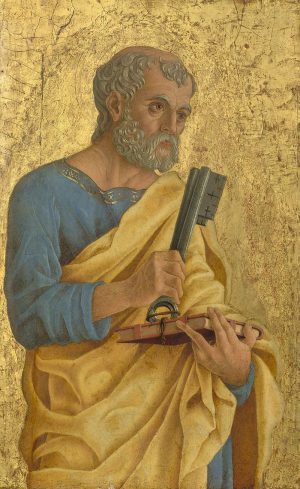 Sermon: The Confession of St Peter 2021

The following sermon was preached by Dr Thomas Winger for the first morning chapel service of the winter semester, 18 January 2021, in the seminary’s Martin Luther chapel in celebration of the Festival of St Peter. The text is Mk 8:27–9:1.

Dear brothers and sisters of our Lord Jesus Christ: If I were into dramatics, I’d be tempted today to take the sermon I’d planned to preach and brush it grandly aside in order to address the extraordinary crisis in which we find ourselves today. To begin the semester with no students in the building. To hold the first chapel service with only a few people in front of me. But the truth of our Christian faith, the truth that the Festival of Peter’s Confession attests, is that the only message we need is the simple message of Jesus the Christ. There is no better word to us on the first day of another term, no matter the outward circumstances. We are here to listen to that confession and to be nourished by the Jesus He proclaims.

But there is a way in which I’ve had to brush aside a sermon. And that’s because, as I browsed my files, I found that I’ve previously preached only on Matthew’s version of this story, which, as you might recall, contains the famous promise to Peter that on the foundation of his confession Jesus would build His Church. In the Book of Concord Melanchthon says those words established the preaching office—and so it’s quite extraordinary to hear the story in the Marcan form, which, by omitting that declaration, more starkly emphasises the so-called “Messianic Secret”. “Peter answered Him, ‘You are the Christ.’ And He strictly charged them to tell no one about Him” (Mk 8:29-30). This is hardly the theme verse we’d choose to start a term of study towards the preaching office!

To understand why Jesus gave this puzzling charge, we must first ask what Peter meant when he confessed to Jesus of Nazareth, “You are the Christ.” Whatever Peter meant, it was somehow in contrast to the common view of the crowds that Jesus was John the Baptist raised from the dead, or Elijah the great prophet of old, whom God promised through Malachi to send as a herald of the end times. Of course we know that the crowds were wrong, for Jesus Himself tells us that John the Baptist was the fulfilment of that prophecy, Elijah redivivus, the herald of the Messiah, not the Messiah Himself. No, though Jesus had a prophetic ministry, though He was the greatest spokesman of God, there was something yet greater about Him: He was the Christ. “Christ”, as in chrism and christening, was a title that referred to a ritual act of pouring olive oil over the head of someone chosen by God to hold one or the other of the highest offices in His kingdom. And so by calling Jesus “the Christ” Peter was confessing that He was the Son of David, the One who would come to reign on His throne for ever; and that He was the Son of Aaron, the High Priest who would open the holy of holies to God’s people and deliver to them His holiness. Which of the two was uppermost in Peter’s mind is an unanswerable question, but it seems to me he would have shared the common hope of his people that the Son of David would re-establish the glorious kingdom of Israel, a misunderstanding that the disciples in their slowness would cling to even up to the moment of Jesus’ ascension, when they asked: “Lord, will You at this time restore the kingdom to Israel?” (Acts 1:6). And so, though they don’t have it completely wrong, because they haven’t yet got it fully right, Jesus calls them to silence.

The Messianic piece that they hadn’t yet put into the puzzle is the slightly more obscure prophecy of Isaiah, through whose lips the Coming One had announced: “The Spirit of the Lord God is upon me, because the Lord has anointed Me to bring good news to the poor …” (Is. 61:1). The Anointed One who speaks here is the Suffering Servant, the One who’d be despised and rejected by men, who would carry our griefs and sorrows, be pierced for our transgressions, be led silently to slaughter as a lamb before its shearers, who would be cut off from the land of the living, who would lie in the grave with the wicked, even though He’d done no violence and uttered no deceit (Is. 53). This is the bit Peter was still missing. This much is clear as Jesus proceeds from Peter’s confession to make one of His own: “And He began to teach them that the Son of Man must suffer many things and be rejected by the elders and the chief priests and the scribes and be killed, and after three days rise again” (Mk 8:31). There could be no proclamation of Jesus as the Christ unless they preached this Christ, the suffering One.

And so to set aside the message of the Festival of Peter’s Confession in order to preach something more relevant to our present suffering would be a grave misstep, as grave as Peter’s own rebuke to Jesus. In the midst of the anxiety and danger that so heavily presses down upon us, there is no more “relevant” message than the Word of the Christ who has suffered for us, who took upon Himself our illnesses of body, mind, and soul, who walked them to the cross and had them sheared away like wool from a lamb’s back. The Confession of Peter may have been only partly understood by the one who first spoke it, but Jesus led him along the road that would teach him what it fully meant. He walked Peter with Him to the cross, He showed Him a great love that was open to sacrificial death, and He showed Him His risen body that bore the scars of His crucifixion, though faded and healed. He did this to prepare Peter for his own road of suffering, his own cross, and to show us our own way through suffering into resurrected life, where our scars will heal and fade. He shows it to us with His sacrificed body and blood on this altar today, above which, as the ancient hymnwriter put it, He “reign[s] in triumph from the tree” (LSB 455:3).