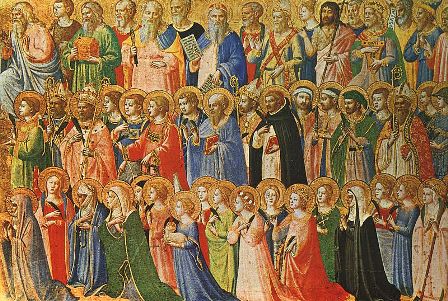 The following sermon was preached by Dr John Stephenson in the seminary’s Martin Luther Chapel for the divine service in observance of All Saints’ Day, 1 November 2021.

Today’s festival issues a formidable challenge to everyone who endeavours to keep it. Do we really believe those words that habitually roll off our tongues to the effect that God is the Maker of all things visible and invisible? An unbeliever has no problem imagining Jesus seated on a hillside pronouncing the Beatitudes. Historians and sociologists have abundant evidence of men and women endeavouring to put His precepts into practice. But the blessings and rewards promised by Jesus remain stubbornly invisible, as does God Himself. So do the meek ever inherit the earth, do the pure in heart see God, do the persecuted reap a heavenly reward? More to the point, is there even a God for the pure in heart to fasten their eyes on? Shouldn’t we just grow up and acknowledge that nothing exists beyond what our five senses can apprehend? Isn’t the whole invisible realm just a fantasy dreamt up by the failures, inadequates, and resentful of this world?

Well, theists in general and Christians in particular believe that the most important things escape immediate detection by the five senses. As St Paul puts it, ‘The things that are seen are temporal, transitory, provisional; the things that are unseen are eternal.’ Among eternal realities the uncreated takes first place, God the Three and the One. And there are also beings made in time that endure forever, starting with the hierarchy of angels that behold God’s face and do His will. Today we focus especially on the multitudes of men, women, and children who existed here below for a brief space of time, often enduring wretchedness and misery, yet acknowledging the Lord and calling on His name. In what might be thought of as a holy dream, John beholds these people victorious, amply provided for, delivered from all woe, looking into the face of the God they believed in during their earthly sojourn.

For less than four decades a celibate here on earth, Jesus our Lord is the only married man left standing in the world to come. You can’t honour Jesus and despise His Bride, the Church. And you can’t be part of the Church unless you accept that the Father sent His Son to assume human nature, to saddle Himself with human guilt, and to take as His collective wife mankind in the capacity of a fallen woman. Do you believe that God for Christ’s sake forgives guilt, that He justifies the ungodly, and in particular that He takes you, yes you, into His friendship even when you are painfully aware of your worst acts of enmity towards Him? Do you believe that God really glorifies human creatures, that Blessed Mary is truly higher than the cherubim and more glorious than the seraphim, that the penitent thief really passed from his blood-soaked gallows to the third heaven, to paradise? Today’s festival proclaims that these things are true, indeed that ‘the things that are seen are temporal, but the things that are unseen are eternal.’

How are we weak, frail creatures to stay anchored to this verse that sounds as though Paul has just been reading Plato, how are we to remain mindful of the invisible God making His enfleshed Son His Image or Icon, how are we to stay aware of the whole company of heaven? Our forefathers in the Faith, the saints now in glory, have done two things that today have fallen out of fashion, two things that we do well to emulate.

First of all, we can so to say christen space, we can raise buildings and decorate them to express to the senses the things that are eternal. Alas, with the great apostasy of the last generation or so consecrated buildings have been repurposed for other community activities or turned into residences or even torn down. Crosses and spires have been removed so that passersby no longer sense that a house of God was once in their midst. Thank God for exceptions to the rule, for the Coptic basilica down the road built by devout immigrants who for centuries have not been allowed to build new churches in their native Egypt. Our chapel should deliberately preach to all who enter it, to visitors, even to Brock folk who come in to play the piano.

And we can also christen time, which we do by observing the Lord’s Day every Sunday, by subsuming Sundays into seasons, into seasons that reflect the life of Christ, with a long season that marks the reality and destiny of the Church. All of this adds up to the temporal cycle of the church year, parallel to which we also have the sanctoral cycle, the sequence of saints’ days, festivals of Mary, of the apostles, of the heavenly birthdays of the blessed martyrs and many other holy men and women. Space and time can’t be surrendered to the devil, for they are themselves good creatures of God, dimensions which He enters and sanctifies in the Incarnation and in the Church.

‘The things that are seen are temporal, but the things that are unseen are eternal,’ not least the heavenly Church of humans and angels with whom we sing the Sanctus and Benedictus. Fleeting are the words spoken here by human lips, but eternal are their core. Temporal, transitory, and provisional are the outward visible elements of unleavened bread and wine, but eternal is the embodied Lord Whom they veil. As for ourselves, we are as temporal, transitory, and provisional as all else in time and space, as subject to change and decay as the world and the weather. But Christ the visible Icon of the invisible God and all the saints and angels cry out that you too already belong to the heavenly, eternal realm, yourself called while here below to christen space and time in your own person and in all those things and people with whom you have to do.